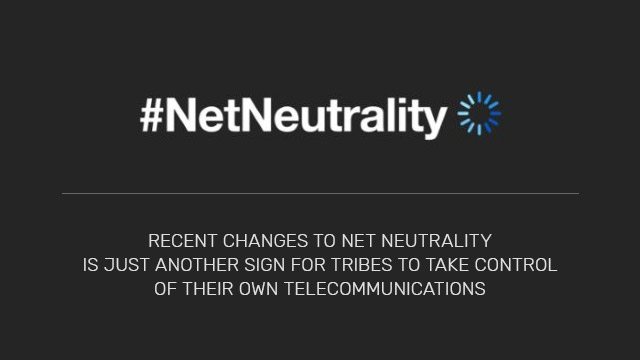 I have been asked by tribal partners what my thoughts are surrounding net neutrality which has been in the news lately. For those that aren’t familiar with this topic, I will provide a definition and some background. The principle of net neutrality was that internet service providers should enable access to all content and applications regardless of the source and without favoring or blocking particular products or websites.

Ajit Pai, the chairman of the FCC has indicated the recent change will restore the light touch on the internet as it was before the 2015 legislation. He believes without onerous regulation it will spur investment in broadband and the larger focus should be on innovation and overall expansion. Today 40% of Americans in rural areas still do not have adequate high-speed internet connections and the statistic is worse at 68% on tribal lands.

Although I am a proponent of open access I believe that the less regulation from the FCC the better. And now back to the question at hand. What does it mean to tribal broadband infrastructure and internet? I believe this is another sign that tribes should take control of their telecommunications and not leave the future to chance. Tribes can ensure that their government, enterprise, and members have all the access needed in the 21st-century digital economy by owning the infrastructure. If you think about it – this generally should be the case as it relates to tribal values. These values of self-determination and sovereignty point to the obvious – investment in broadband is an investment that allows tribes to control their destiny and not be reliant on other telecom service providers.

I urge tribal leaders to consider telecommunications infrastructure as no different than other needs of their Reservations and trust lands. Would you let others build, maintain and control your roads, utilities, housing and other necessary infrastructure? Probably not, so it’s time to think about the internet as a basic utility.

This editorial was written for and published in the Tribal Business Journal, February 2018 issue.